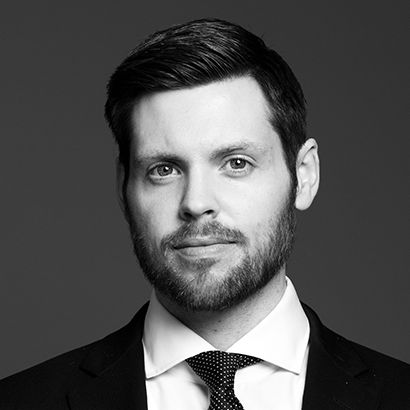 Chris* maintains a diverse commercial and regulatory practice acting for governments, international organizations, banks, multi-national corporations and regulated professionals. Whether in court, a tribunal or a high-stakes boardroom meeting, Chris plays§ to win at all times. Before joining Lenczner Slaght, Chris worked for a Public Inquiry and spent time in the trade and investment group at the Canadian Embassy in Washington D.C., where he honed his strategic decision-making skills. As a life-long hockey player, he knows how to stick handle high-stakes cases where every party is playing for keeps‡ . A skilled advocate, he shares his advocacy tips and tricks as a moot coach of his alma mater's Jessup Moot team and as a member of the Gale Cup Moot committee. Chris has also written articles on topics ranging from international arbitration to securities law. .

is a lawyer at Lenczner Slaght.

His practice encompasses a broad range of civil litigation, including corporate-commercial, investment and regulatory matters. He has a particular focus on commercial disputes, corporate restructuring and insolvency proceedings and class actions.

As part of his professional liability practice, he also routinely defends physicians on behalf of the Canadian Medical Protective Association.

Prior to joining Lenczner Slaght, Chris worked for the Missing Women Commission of Inquiry undertaken by the Province of British Columbia and in the trade law and investment group at the Canadian Embassy in Washington D.C.

While at law school, Chris and his teammates placed first in both the Lerners LLP and Gale Cup moots and were selected to represent Canada at the Commonwealth Moot in Cape Town, South Africa. Since being called to the Bar, Chris has remained involved in mooting and now serves as the President of the Gale Cup Moot Committee. He also serves as a member of the Young Advocates Standing Committee, a committee representing young advocates within The Advocates’ Society.